4G is the replacement for 3G networks. It is the next wave of high-speed mobile technologies. The two top contenders of 4G are LTE and WiMAX, both of which are IP based networks that are built from similar, but incompatible, technologies.

Technology which automatically changes the forward error correction and modulation of satellite links to compensate for changes in link conditions due to weather, e.g. rain fade, and other sources such as RF level changes or interference.

An encryption standard comprised of three blocks of ciphers AES-128, AES-192, and AES-256.

An amplifier is a device that increases the power of a signal by use of an external energy source.

Transmission of information using a continuous signal that varies based on amplitude, phase, or other proportion.

Equipment that typically transmits and receives electromagnetic waves, usually referred to as the satellite dish.

The Amplitude and Phase Shift Key is a modulation scheme that changes the amplitude and phase of the carrier wave.

A range of frequencies within a spectrum, expressed in Hertz. Can also be the data transfer rate or throughput, expressed in bits per second.

A core routing protocol of the Internet.

Speed of transmission, measured in bits per second (bps).

Sending a single transmission to multiple sites that are capable of receiving the signal.

Used for uplink satellite transmission that converts a band from a lower frequency to a higher frequency.

The ratio of the received carrier power and the noise power in a given bandwidth, expressed in dB. This figure is directly related to G/T and S/N. Typically in a signal, the higher the C/N, the better the quality.

Frequency band with uplink 5.925-6.425 GHz, downlink 3.7-4.2 GHz. The C-band is primarily used for voice and data communications as well as backhauling.

Transmission of cellular voice and data signals, typically from a base station to a remote site.

A Channel is a frequency band in which a specific broadcast signal is transmitted. Channel frequencies are specified in Canada by Industry Canada and in the United States by the Federal Communications Commission.

A means of interacting with a computer program where the user (or client) issues commands to the program in the form of successive line of text (command lines).

Footprint or the area on the earth’s surface that is covered by a satellite’s transmission beam.

Enables end users with the power to monitor the usage, bandwidth and efficiency of their network by providing real-time and historical statistics and general health of remote sites.

The ratio of the power to one Watt expressed in decibels. Typically the E.I.R.P of satellite beams are measured in dBW.

The time it takes for a signal to go from the sending station through the satellite to the receiving station. This transmission delay for a single hop satellite connection is very close to 240 ms.

The enhanced version of the DVB-S satellite broadband transmission standard and has forward error correction and modulation specifications.

Ground equipment that transmits and receives electromagnetic waves, also referred to as an antenna.

iDirect’s next-generation product line of routers, line cards, and iDX software, all built on the DVB-S2 standard with Adaptive Coding and Modulation (ACM).

It is a channel access method that allocates each application or user a different frequency band.

It is the system for error control that has the sender include redundant data so errors can be detected and corrected at the receiver.

The area on the earth’s surface that is covered by a satellite’s transmission beam.

Internationally, frequencies are divided into well-defined bands. For satellites, the relevant bands are; L-Band, C-Band, X-Band, Ku-Band, and Ka-Band.

A measure of amplification expressed in dB.

Geostationary Earth Orbit satellites orbit at 35,786 km (22,282 mi) above the equator in the same direction and speed as the earth rotates on its axis, making them appear as fixed in the sky.

Group Quality of Service is iDirect’s bandwidth allocation and prioritization algorithm that allows for countless possibilities of quality of service levels, bandwidth management and traffic prioritization.

A figure of merit of an antenna and low noise amplifier combination expressed in dB. “G” is the gain of the system and “T” is the noise temperature. The higher the G/T, the better the system.

Host Network Operator is a network operator who leases out hub space to smaller service providers.

Hyper Text Transfer Protocol is an application level protocol used to request and transfer objects across the web.

Indoor Unit is network equipment typically located inside a building that consists of a modem and router (or hub if it inside a teleport) connected to the corporate LAN or terrestrial infrastructure.

Internet Protocol is a protocol used for data communication across a packet switched network. Typically used with TCP, a higher level protocol.

Internet Service Provider is a company that offers Internet access to customers.

Transmission of a signal to the satellite. In a network it is typically referred to as the transmission from the remote router to a satellite to a hub.

Kilobits per second (Kbps or Kbs)

One KiloHertz is the equivalent of one thousand Hertz, or one thousand cycles per second. It is used to measure frequency and bandwidth.

Local Area Network is a computer network that covers a small physical area.

Polarization of an electromagnetic wave in which the electric vector at a fixed point in space remains pointing in a fixed direction, although varying in magnitude. Also known as plane polarization. With satellites the planes are referred to horizontal polarization or vertical polarization and allows for frequency re-use on the satellite for more bandwidth capability.

This is the preamplifier between the antenna and the earth station receiver. For maximum effectiveness, it must be located as near the antenna as possible, and is usually attached directly to the antenna receive port. Boosts the desired signal while adding as little noise or distortion as possible.

A combination Low Noise Amplifier and downconverter built into one device attached to the feed. It is used for the downlink satellite transmission by converting a band from a higher frequency to a lower frequency.

Frequency band from 1 to 2 GHz, this band is the result of the down-conversion of the received downlink satellite signal from the LNB.

Low Density Parity Check is a forward error correction code that is currently the most efficient scheme, used with DVB-S2.

Low Earth Orbit satellites orbit from 160-2000km above the earth and take approximately 1.5 hours for a full orbit and only cover a portion of the earth’s surface.

MEO satellites are located above LEO and below GEO satellites and typically travel in an elliptical orbit over the North and South Pole or in an equatorial orbit.

Topology whereby a remote VSAT location communicates with another remote location without routing through the hub.

Multiple-Frequency Time Division Multiple-Access is a broadband access method where different data streams are put into different slots that are separated by both frequency and time.

One MegaHertz is equivalent of one million Hertz, or one million cycles per second. It is used to measure frequency and bandwidth.

A piece of network equipment containing a modulator and demodulator for receiving or transmitting satellite signals.

The encoding of a carrier wave by amplitude or frequency or phase.

A device which modulates a carrier.

Multicast is a subset of broadcast whereby the signal can be sent to many sites within a defined group, but not necessarily to all sites in that group.

Sending multiple signals or streams of information on a carrier simultaneously transmitting on a single signal.

Network Operations Centre is a centralized location where control over operation of a network is managed and monitored.

Network Management System is the hardware and software that monitors and controls a satellite network.

An Outdoor Unit is the equipment located outside of a building close to the satellite dish or antenna and typically includes, a low noise block converter (LNB), and a block-up-converter (BUC).

A Private Branch Exchange is a telephone exchange that connects a private enterprise or organization to the public switched telephone network.

The Paired Carrier Multiple Access Hub Canceller is a satellite signal canceller that maximizes the capacity of satellite networks by using ViaSat’s patented PCMA technology to reduce satellite bandwidth as much as 50 percent.

A technique used by satellite operators to reuse the satellite transponder frequencies when transmitting these signals to Earth. Two methods are possible: linear and circular. To successfully receive and decode these signals on earth, the antenna must be outfitted with a properly polarized linear or circular feedhorn to select the signals as desired.

Phase Shift Key is a digital modulation scheme that changes the phase of the carrier wave.

Quality of Service provides priority and guarantees a certain level of network response time and other performance factors for each application and user.

Decrease of satellite signal strength due to rainfall. This occurs typically at Ku Band frequencies due to its increased sensitivity to noise temperature.

Radio Frequency is the electromagnetic frequencies for wireless transmission that is above the audio range and below infrared light.

A physical device that joins multiple networks together. Normally in a satellite network it is connected to the modem on one side and the computers and other LAN devices on the other side. It forwards IP packets based on network layer information and enables applications such as VoIP, Video and data.

Real Time Traffic Management is an iDirect feature set that is designed to enable high-quality transmission of voice applications that are less tolerant to delay or jitter that can occur on satellite links.

Supervisory Control and Data Acquisition is the system that monitors and controls industrial or facility based remote devices.

The ratio of the signal power and noise power. The higher the number is, the better the quality.

Satellite news gathering is typically done from a transportable unit (truck or mobile entity) to transmit video and voice feeds back to the studios.

A spot beam is a satellite signal that covers a concentrated geographic area so only antennas in that area will receive the signal.

Topology whereby a remote VSAT location communicates with another remote location by routing through the hub.

A Network Switch is essentially a collector/distributer of local network segments/devices.

Transmission Control Protocol is a core Internet protocol that is a higher level protocol often combined with IP.

Time Division Multiple Access is channel access method that allows applications or users to share the same frequency by dividing the full bandwidth into specific timeslots.

One of the communications stations that receives, processes, and transmits signals between itself and a satellite.

A device located on board the satellite which receives signals uplinked from an earth station and amplifies and transmits them back to earth on a difference frequency.

Transmission Security secures VSAT transmissions with encryption to prevent from interception and exploitation.

Transmission of a signal from the remote router to a satellite to a hub.

Virtual LAN is a group of hosts that simulates a LAN although they are not located locally on the same network switch.

Virtual Network Operators lease hub space from HNOs while keeping complete control of their network and their remotes. iDirect offers this capability by assigning each VNO operator its own line cards and NMS servers and protocol processors. The VNO commissions, controls and operates its remote sites in the proprietary network as if it owns a physical hub.

Very Small Aperture Terminal is an antenna that is typically less than 3 meters in diameter.

Wideband Global Satcom is a satellite communication system used by the U.S. Department of Defense

A brand originally licensed by the Wi-Fi Alliance to describe the underlying technology of wireless local area networks based on the IEEE 802.11 specifications. A person with a Wi-Fi device, such as a computer, telephone, or personal digital assistant (PDA) can connect to the Internet when in proximity of an access point. The region covered by one or several access points is called a hotspot. 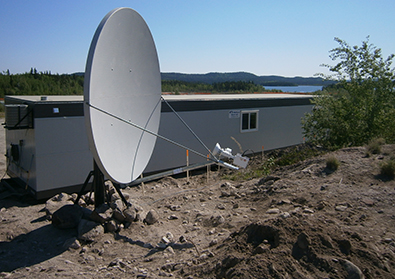